Some mighty words by Najagneq, the Yupik shaman. 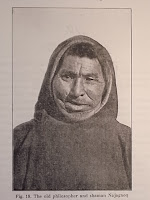 Excerpts from Across Arctic America: Narrative of the Fifth Thule Expedition. Conversation between Knud Rasmussen and Najagneq, the Yupik shaman from Nunivak Island, in Nome Alaska in 1924.
* R=Rasmussen. N=Najagneq
R. "What does man consist of?"
N. "Of the body; that which you see; the name, which is inherited from one dead; and then of something more, a mysterious power that we call yutir - to all that lives."
R. "What do you think of the way men live?"
N. "They live brokenly, mingling all things together; weakly, because they cannot do one thing at a time. A great hunter must not be a great lover of women. But no one can help it. Animals are as unfathomable in their nature; and it behooves us who live on them to act with care. But men bolster themselves up with amulets and become solitary in their lack of power. In any village there must be as many different amulets as possible. Uniformity divides the forces; equality makes for worthlessness."
R. "How did you learn all this?"
N. "I have searched in the darkness, being silent in the great lonely stillness of the dark. So I became an angakoq (shaman), through visions and dreams and encounters with flying spirits. In our forefathers' day, the angakoqs were solitary men; but now, they are all priests or doctors, weather prophets or conjurers producing game, or clever merchants, selling their skill for pay. The ancients devoted their lives to maintaining the balance of the universe; to great things, immense, unfathomable things"
R. "Do you believe in any of these powers yourself?"
N. "Yes; a power that we call Sila, which is not to be explained in simple words. A great spirit, supporting the world and the weather and all life on earth, a spirit so mighty that his utterance to mankind is not through common words, but by storm and snow and rain and the fury of the sea; all the forces of nature that men fear. But he has also another way of utterance, by sunlight, and calm of the sea, and little children innocently at play, themselves understanding nothing. Children hear a soft and gentle voice, almost like that of a woman. It comes to them in a mysterious way, but so gently that they are not afraid; they only hear that some danger threatens. And the children mention it as it were casually when they come home, and it is then the business of the angakoq to take such measures as shall guard against the peril. When all is well, Sila sends no message to mankind, but withdraws into his own endless nothingness, apart. So he remains as long as men do not abuse life, but act with reverence towards their daily food."
"No one has seen Sila; his place of being is a mystery, in that he is at once among us and unspeakably far away."
※ Picture from the official record of the Fifth Thule Expedition.
Posted by 八木清 YAGI Kiyoshi at 14:33